If you would like to connect your Text Blaze to physical push buttons, you can use the Elgato Stream Deck for this.

While the Elgato Stream Deck is often thought of as a live-streaming tool for gamers and other live-streamers, I have been playing with it to create a physical "push button" productivity system.

I tested the deck with Text Blaze and it works great!

Coupling Text Blaze with the Elgato Stream Deck lets you use one-touch push buttons to insert your proposals, sales letters, and other text snippets. 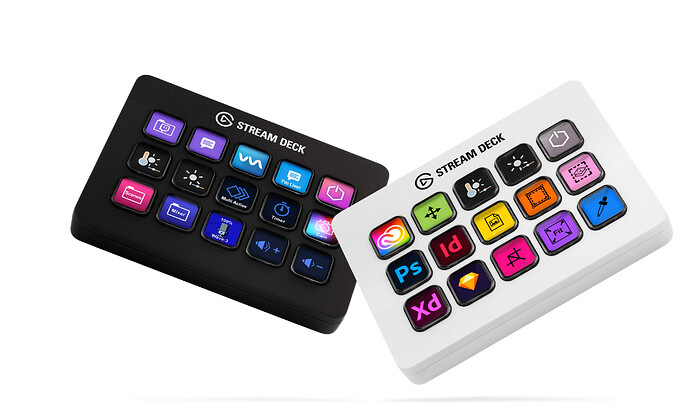 A few of our power users also do this, check out this earlier thread: What is faster than Text Blaze?

I'm curious about this scenario. Assume Text Blaze had a feature to assign "hotkeys" for snippet triggers (we do not, right now). For example, Ctrl+1 to trigger a snippet, Ctrl+2 to trigger another snippet, etc. Would you still prefer to use the Stream Deck, or would you use the hotkeys instead?
(question directed to you and other users in the same scenario)

Firstly, I think that if TextBlaze could use keyboard shortcuts like Ctrl+1, Ctrl+2, etc to trigger snippets, that would be a great additional feature. But sometimes hotkey combinations like this may be in use with other programs.

Push buttons on the Stream Deck can be quicker than keystrokes depending on how you structure your shorcuts.

For example, I usually use this combination to insert the url to my coaching program / ucoach (left a space so it wouldn't trigger here). I add the u in front to indicate a url. This is 7 key presses to activate. Still a lot faster than loading my site and using copy and paste.

But on my 15-button screen deck, it could be as short as 1 key press if I use it on the home screen. But I usually have categories on the Stream Deck since 15 keys wouldn't handle all the urls, shortcuts, etc. I would need. So the key presses would likely be 3 or 4.

Not too much different from the typed shortcut. But if the setting was Ctrl+1, than the Ctrl+1 shortcut would be faster than the Steam Deck.

With 100s or possibly 1000s of planned snippets, I am not sure I would load all of them into the Stream Deck. But it does work well with one of my clients where I send a lot of sales and followup emails on their behalf.

So, yes, I do like the idea of Ctrl+1, etc. as a feature for shortcuts, but I find remembering which key combos I assigned to which snippet may be difficult. My system of / ucoach makes it easy to remember because I have a set system for writing the shortcut sequences.

Speaking for myself, I agree with CaptainTime in that I find remembering key combinations to be difficult (part of the reason I bought and tried the StreamDeck), but on the other hand, I know such a feature would likely be well received. That's one of the biggest "pros" of software like AHK and the ones who use it, love it. So don't be afraid to add that to your list of enhancements!

I've been using Shortkeys - a Chrome extension - to execute Javascript against a shortcut key. I use this in combination with TextBlaze to make my workflow much faster. Example - I use ctrl + m - to open an email from Quickbase and ctrl + f to send an SMS. These are very customized keys based on the app I'm using most frequently. Combined with TextBlaze I have probably increased productivity of repetitive actions 10 fold since I no longer have to use my mouse to click on buttons.

@Laren_Eggleston Didn't you do something like this a while back?

@Brad_Hedinger not that I can think of. I can say that I've found different ways to make things go a bit faster for me in the past, but right now I'm still trying to get my workflow set and am only now starting to make the snippets for my new position (that I've had since September!).

I'm a big fan of the Stream deck & TB. I've started building some buttons that fire specific commands. For example: I have a long list of leads that I'm emailing, sending 10 per day. I grab those 10 leads and download as a CSV and open in Notepad - I highlight the first row - switch to my Gmail tab and then I fire my first button:
Stream Button 1:
It starts a new Gmail message / Fires the snippet / Pastes the three variable into the snippet / inserts them in the email. Once I verify everything looks good I hit the 2nd Stream Button
Stream Button 2:
This triggers an Alt-Tab back to Notepad / It selects the next row and copies it / Alt-Tabs back to the Chrome tab with Gmail running.
Then I fire button 1 again!

The Stream Deck allows for the necessary pauses and alt-tabs along with firing the snippet.

Both TB and Stream Deck are awesome on their own - putting them together is amazing!

Hi @JGnTX - a video or it doesn't count

Have you tried to circumvent the CSV to notepad part with Data Blaze?

Hey Dan! Thanks for an amazing time-saver. Sadly the video would have proprietary info. I'll do a sample of it sometime and update. I haven't had time to check out Data Blaze - I'll give it a look. Thanks!